The History Of The Pittsburgh Steelers

The Pittsburgh Steelers are widely known as one of the most successful sports franchises ever, but winning didn’t come early on for a team that has been family owned and operated for over eighty years. The Steeler mystique has as much to do with a floundering organization as it does with being arguably the greatest football team in the history of the NFL. Here is their story

In 1933 Arthur J. Rooney bought a pro football team and called them the Pittsburgh Pirates, the cost of the team was $2,500. He could have got them for less, but he was in a good mood and chose not to barter. But Art Rooney was always in a good mood, sports were his passion the opportunity to own his own football team was like a dream come true. And so what started out as a hobby for the North Side entrepreneur, would soon become a labor of love for the next forty years. That is until what many consider to be divine intervention when a single play would change not only the life of himself and his family, but his beloved city, a nation, and the entire world.

Read the entire history of the Pittsburgh Steelers from it’s earliest years through the glory days of the 1970’s. This complete history is filled with classic archival footage as well as never before published interviews from the player and coaches. This is a must read for fans of the Black & Gold and Steeler Nation worldwide, order your copy here: 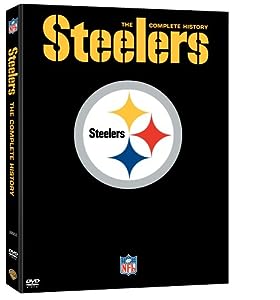 Purchase Your Copy While Supplies Last At Our Online Store